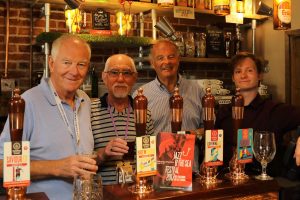 Having enjoyed a long career in the film and video industry, Gerry frequently used jazz music in his programmes to inform, educate and motivate audiences around the world. He spent nearly a decade living in the South of France reporting on arts, entertainment and music festivals and on returning to the UK it seemed natural to think about creating an international music festival to showcase the best of British Jazz. In 2015 the Bournemouth Jazz Festival was born and this year Gerry has created a bigger and better festival, featuring jazz music from around the world.

His vision was to “enhance Bournemouth’s cultural profile and increase its tourism appeal over the next five years through the establishment of an internationally recognised Jazz Festival that features world class jazz musicians and showcases local musical talent and through this contributes to the town’s future economic growth and cultural development.”

Gerry assembled a professional team to manage and co-ordinate the Festival, a team with experience in planning and organising live music events, in artistic, cultural and educational development, in financial management and in marketing, publicity and public relations.

He invited well known jazz professionals to come to Bournemouth to perform with local musicians over the weekend 22nd to 24th April 2016 and by including nationally recognised jazz players, a large number of visitors were attracted to spend the weekend in town and the festival was considered a great success.

On Friday night, on the Jazz Village stage in the town square, talented local group Spiral Jazz kicked the Festival off and were quickly followed by Charlie Farran and his highly entertaining Rhythm & Blues Band. Meanwhile, at Canvas, a new club venue located in the old Bournemouth Arts Institute building, Zoe Schwarz and her Blue Commotion Band continued the groove, playing their well known R&B numbers to the delight of the late night lounge dwellers.

Friday night will also be remembered for the fabulous Swing Unlimited Big Band in concert at the King’s Hall in the Royal Bath Hotel playing a selection of jazz standards made famous by Count Basie, Ella Fitzgerald and Frank Sinatra with their resident vocalists Karen Pitt adding a touch of class and Pat Peiro a bit of that old black magic.

Throughout the day on Saturday the town was treated to the sounds of jazz music. On the free stage in the town square, an eclectic mix, from the latest in jazz fusion through to good old trad. Whilst at the World Jazz Jamboree and other ticketed events, international stars Jean Toussaint, Yazz Ahmed and Arun Ghosh entertained audiences with music from around the globe.

The evening was a choice between the Girls Only Jazz Orchestra with guest singer Tina May in the Print Room or the Ginger Baker Experience with Andy Sheppard, US drummer Gene Calderazzo and Ghanian Abas Dodoo giving masterclass lessons in jazz drumming at the Royal Bath Hotel.

For many, Sunday was a day of rest, but for aspiring young jazz musicians, it was an opportunity to attend a series of jazz workshops and enter the Jazz Factor competition designed to encourage local schools. For the eventual winners, Wimborne’s QE School, it was the beginning of an exciting new adventure – the first prize was a jazz trip to France courtesy of Brittany Ferries.

And to help the rest of the jazz enthusiasts to relax on Sunday afternoon, a concert by Jacqui Dankworth in the Royal Bath Hotel followed by the dedicated sounds of jazz fusion with Theo Travis and his band, Double Talk, straight from a late night gig in London.

The festival rounded off on Sunday evening with a Hollywood style Awards Ceremony in the Pavilion Ballroom, attended by the Mayor of Bournemouth, Councillor John Adams and his wife who presented prizes to the winners and thanked the festival team for organising such a fantastic Weekend of Jazz by the Sea!

Any cookies that may not be particularly necessary for the website to function and is used specifically to collect user personal data via analytics, ads, other embedded contents are termed as non-necessary cookies. It is mandatory to procure user consent prior to running these cookies on your website.